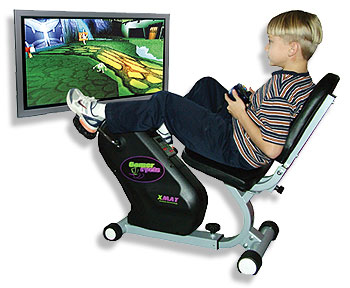 The GamerCycle® does not control video games. Instead, it controls the signal between the videogame console and the television. As long as the user pedals, the videogame can be seen. When the user stops pedaling, the TV screen goes blank. It’s an effective way to insure that your kids get the exercise they need.  The premise is simple – as long you keep pedaling, the television screen is “ON”… stop pedaling, and the TV screen goes blank. Go from 100% sedentary time to 100% exercise time! Need a break? Hit pause, then resume the game when you are ready. Works on cable TV, satellite TV, DVD & VCR players too.

Q.    What is the GamerCycle?
A.    The GamerCycleTM  is a recumbent exercise cycle with parent-controlled lockout features. It controls the signal between the game console and the television. As long you keep pedaling, the game (or show) can be seen on the TV.   When you stop pedaling, the TV screen goes blank. The GamerCycleTM is NOT an interactive video game controller. You don’t control the players in the game by pedaling or steering. For that you can get the NeoRacer or GameBike.

Q.    Which game consoles does it work with?
A.     All of them. It works will all game consoles that connect to the television using RCA plugs. This includes Playstation, Playstation2, GameCube,  Xbox and many others.  Some game consoles operate with coaxial (coax) type cables. If you do have a coax cable, you can purchase a coax to RCA adaptor from any game or electronics store.

Q.    Can you use it with a VCR or a DVD player?
A.     Yes. You can use the GamerCycleTM with all VCR’s, DVD players and game consoles that connect to the TV using RCA plugs. This includes nearly all devices out today.

Q.    How Does it Work?
A.    It controls the signal between the game console and the television. As long you keep pedaling, the game can be seen on the TV.   When you stop pedaling, the TV screen goes blank.

Q.    Why was the GameBike Created?
A.    The GamerCycleTM fitness system was born from the same concern many parents share, namely, our children aren’t getting sufficient exercise on a daily basis? Gone are the days when kids would jump on their bikes first thing in the morning, play outside all day, and come home for meals, with maybe a little TV before going to bed.
Here are a few cultural trends that are contributing to the popularity of video games:

Physical activity tends to be structured and time-bound (i.e., soccer, baseball, gymnastics, etc.).
Parents are no longer comfortable allowing kids to play outside alone or ride their bikes to and from activities.
Few other activities can hold their attention for so long… video games can be a blessing to parents and kids, especially on rainy days or when kids have a lot of free time.
Studies show that many video games have positive mental and/or hand-eye coordination benefits,
The quality of graphics and ingenuity of the games keeps getting better and better, so it is likely that kids’ passion for playing them will only increase.
In the 6-17 year old age group, it is estimated that children play on average 8.3 hours per week.

The makers of GamerCycle thought, “What if we could turn this completely sedentary time into 100% physical activity?”

The benefits from such an idea would be plentiful:

Minimize the concern that children are playing video games too much and not getting needed exercise.
Video game play time would no longer be a “couch potato” activity.
Reduce or eliminate the constant arguing between parents and children about video game play time.
Improve children’s self-esteem, as they feel themselves getting into better shape.
Introduce exercise into boys’ and girls’ lives in a fun fashion, providing a cornerstone for other physical activity.

Exercise is best when it can be made fun so that it doesn’t become something we rebel against and dread. The GamerCycle was designed with this in mind. It doesn’t interfere with the actual playing of the video game. The player is mentally focused on the game while his or her body gets the exercise it needs.
Kids will sometimes play video games for hours on end, so the GamerCycle was designed to be very ergonomic and comfortable.

Customer Testimonials?
“I have two children with Cerebral Palsy and we have a Gamer Cycle. The Gamer
Cycle staff helped me in modifying the Cycle to produce the best results for
my children. I believe it is a way to keep my children motivated (the TV stays
on) and moving their legs at the same time. Our Children get the least amount
of exercise and have a hard time playing outside. Yet we still need to build
their endurance and strength and the Gamer Cycle is the best way to accomplish that and make it fun for our kids.”

“Ever since receiving the Gamer Cycle, my son Connor has been hard at work
pedaling away while playing his game cube. Not only has he already logged
many hours pedaling, but all the neighborhood kids are over here pedaling away as well. Laura and I have removed his 30 minutes/day restriction for his gamecube now that the Gamer Cycle is installed. We want him pedaling! Thanks again for a spectacular product!”
Kevin & Laura
Austin, TX

I talked to my son today about how and what he liked about his Gamer Cycle. He said “It’s AWESOME!” He really likes the variable resistance and the lock out/on switch. I like the fact that he is getting some exercise while playing video games. This is just great!!
David and Van
Dripping Springs, TX