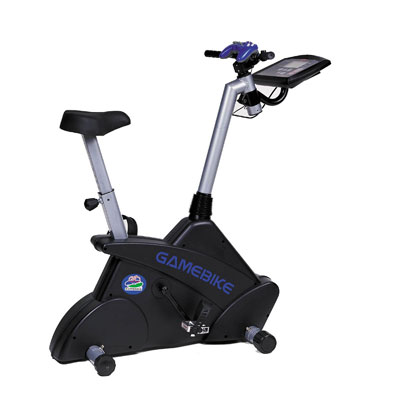 The GameBike® is a durable stationary fitness bike, equipped with magnetic resistance for a smooth quiet ride. The GameBike interacts with videogames on Playstation®, and Playstation®2 game consoles. The optional adapter kit allows you to interact with games on the Xbox®, GameCube® and your PC. You control your speed by pedaling and steer with the handlebars. Use the built-in game controller for all other functions.

You don’t have to be a “Gamer” to enjoy the GameBike. Here’s what one of our customers (a non-gamer) had to say about the GameBike.

“Hello Lori, Just wanted to let you know the bike arrived Friday. It took about 30 minutes to assemble and I was off and riding. My first ride lasted about an hour and a half. It wasn’t planned that way it just happened. Again last night I rode, an another hour slipped by.
I have never been a “Gamer” before, but now I see why the kids spend hours in front of the TV. The addictive/challenging nature of the games keeps them hooked.

Now combined with the GameBike there is no excuse in having overweight kids/parents! This is the future of exercise! A distraction so great that you don’t realize you are exercising. Time flies by on the GameBike instead of dragging along waiting for the buzzer to signal your release from a torturous machine.

I have owned all sorts of exercise equipment and this is the only one that didn’t make me want to get done with it as soon as I can. The GameBike feels very well made and with the availability of games, I know I will not tire of it like I have others.”

“I recently purchased a GameBike (three months ago). It is an amazing machine. I am really enjoying it! I would be very interested in beta testing Island Worlds. I have never found anything that keeps me engrossed in exercising like the GameBike. I am currently using Yourself Fitness and the GameBike on a daily basis. Prior to purchasing the GameBike, I was definitely a proud member of the older couch potato generation, and now, I am exercising about 45-60 minutes per day. I can tell you that I am seeing the results! I’ve tried just about every exergaming program out there so I am familiar with the concept. Games like Myst are among my favorites and I’ve actually been looking for something like Island Worlds to use with my GameBike.”

Frequently Asked Questions
Q.    What is the GameBike?
A.    The GameBike is an indoor stationary bike that acts as a controller for Playstation® and PS2® (Playstation2) game consoles. The GameBike is solidly constructed with steel tubing and comes with a comfortable seat. It utilizes magnetic-resistance, for a smooth quiet ride.

Q.    How Does it Work?
A.    The pedals control your speed in the game and the handlebars (or steering wheel) control the steering.  All other functions can be accessed using the built-in game controller.

Q.    Which games are compatible with the GameBike?
A.    The GameBike works best with racing games. See the List of Tested Games.

Q.    What functions does the GameBike have?
A.    You can adjust the force required to turn the pedals. The magnetic resistance is smooth, quiet, and friction-free. The pedals control your speed in the game, and the handlebars (or steering wheel) control the steering. The bike doesn’t always have to be used interactively, just unplug the interface and it becomes a standard fitness bike.

Q.    Why was the GameBike Created?
A.    The GameBike is the brain child of orthopedic surgeons Dr. Craig Davis and Dr. Ted Parks who are both concerned about the increasing childhood obesity rates. They set out to design something that would take the boredom out of exercise and would help children from “8 to 80+” improve fitness levels while also burning calories. The GameBike is their answer to an inactive lifestyle that sees children average 5-8 hours a week playing sedentary games and adults watching too much TV.